How Gorman-Rupp T4 is helping fight fires in NSW

How Gorman-Rupp T4 is helping fight fires in NSW

Last week,  our NSW Regional Manager Phil Rothheudt had the privilege of watching the team from ACT Emergency Services operate our Gorman-Rupp T-Series pump to fill fire fighting aircraft at their Canberra Airport facility (adjacent to RAAF base).

The planes that were being filled  were SEAT aircraft (acronym for Single Engine Attack Tanker) and take about 3500L which our pump was able to fill in 2 ¼ to 2 ½ minutes. This is  a fantastic increase over the old pump which took 3 ½ minutes. A great result for ACT Emergency Services resulting in a significant reduction in turn-around time.  Gorman-Rupp T-Series showing a massive performance improvement with a 35% reduction in filling time.

So how fast can Gorman-Rupp fill the Bomber?

The day was to become more exciting, there was hope one of the “Bomber” aircraft (LAT; Large Air Tanker), either a C130 Hercules or the RFS 737 would come in to fill up.

The plan was to see how fast our pump could complete a fill of 16,000 L. Unfortunately the Bomber didn’t come in the day we were onsite. The fire situation is extremely “fluid” and aircraft can be deployed anywhere at any given moment; deployment is controlled by the teams fighting fires on the ground.

The whole aerial situation is controlled by the RJ85 aircraft.

This aircraft acts as the “air traffic controller” flying above the situation, guiding the SEATs and in particular the LAT (helicopters in use as well).

We have subsequently been advised by ACT Emergency Services that the opportunity eventually arrived to fill the 737 LAT(Large Air Tanker).

Again using the Gorman-Rupp T4 pump, the fill took 14 ½ minutes, down from 23 minutes in the past. A 37% improvement! 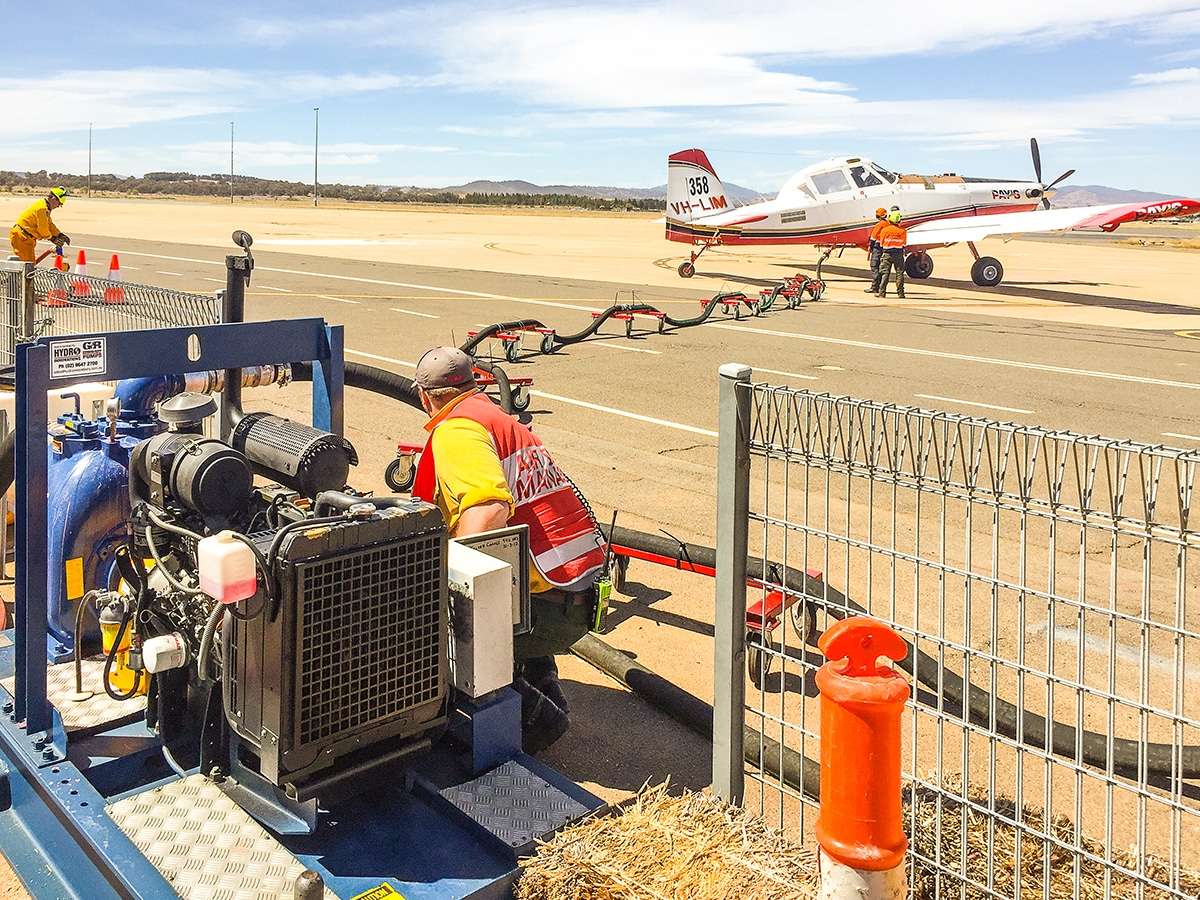 There are 3 different liquids deployed:

So all in all a very interesting (hot and windy) day especially given the very positive feedback Phil received  from the guys operating on the ground.

Join our mailing list here to receive notification when we do have further information on filling the Bomber!