A private septage processing facility in New England consistently had a problem complying with its NPDES groundwater discharge permit for nitrogen. The facility receives ~475,000 litres per day of high strength septage but allows up to 40% of the accepted liquids to be fat, oil and grease (FOG) from commercial grease traps. Further, a large portion of the septage is from porto-potty haulers, which contains highly concentrated levels of ammonia nitrogen from urine.

The facility was designed with two in-ground receiving tanks, a plate and frame press and two in-ground EQ tanks prior to the in plant processes which include clarification, aerobic RBCs and anoxic RBCs (rotating biological contactors). In each of the in-ground EQ tanks were propeller-type mixers which would mix the contents but did nothing to “condition” the liquids. Eventually, the shafts broke from exposure to the low acidic pH condition and they were not replaced. This low pH and absence of DO condition directly impacted the viability of the biomass on the RBCs, and viability wavered depending on the strength of the influent wastestream that changed daily.

Venturi Aeration, Inc. was able to review the process and it became very evident that the two in-ground EQ tanks were allowing the supernatant off the plate and frame press to go totally anaerobic. The desired dilution from the returned activated sludge and a portion of the treated water to the EQ tanks prior to the RBCs was also going anaerobic. These EQ tanks were a major source of hydrogen sulfide (H2S) odors that were being released into the surrounding neighborhood and a source of numerous complaints to the DEP.

Pull quote goes here from either the customer or some fun stat from the article or just a snippet of info to call out.

To address the issue of odour complaints from neighbours, two Venturi Aerators were added to the outside, in-ground EQ tanks. The oxygen supplied by the Venturi Aerators from ambient air would oxidise the sulfides into sulfates eliminating odours. One Gorman-Rupp pump (T-4 modified with an anti-clog bar assembly) supplied septage in one EQ tank to a split flow into two (2) Venturi Aerator units, one in each of the two in-ground tanks. Not only are the units are very effective in controlling H2S odours but several other benefits were achieved that were not anticipated.

First, the Venturi Aerators were able to convert the low pH anaerobic liquids from 5.9 to 7.2 within thirty minutes of starting the system. This also imparts high levels of residual dissolved oxygen (DO) converting the liquids into aerobic conditions. When aerobic activity begins, the natural microorganisms off gas carbon dioxide as a byproduct of their digestive processes. As CO2 concentrations increase, pH decreases. But a pH of >6.85 is required for nitrification to begin. Inasmuch as the Venturi Aerator also strips a significant portion of the carbon dioxide a highly pH level is achieved. One formula for reviewing this non-chemical pH adjustment is:

By stripping the carbon dioxide in the aerobic wastewater a logarithmic increase in pH can occur. And as dissolved oxygen levels increase with repeated recirculation the ORP is changed from negative (-) mV values which are ideal for anaerobic conditions to positive (+) ORP values necessary for aerobic digestion.

By adding additional dissolved oxygen while raising the pH, nitrogenous compounds are converted from ammonia nitrogen into nitrates metabolically. This is accomplished by providing a ratio of 3.5 pounds of DO per one pound of nitrogen compounds. While a certain amount of DO is consumed for BOD reduction (1# BOD to 1.5 # DO), excess amounts of DO aid in reducing nitrogen compounds making them more metabolically bioavailable for Nitrobacters. An initial review of the CFUs (colony forming units) in the tank showed there were insufficient Nitrobacter colonies. To remedy this a “BactivatorÒ unit” was added to continually dose “live” cultured Nitrobacters along with colonies of “grease eaters” into the process return liquids and then returned to the EQ tank. This ensures that as “conditioned” liquids flow from the EQ tanks to the RBCs that there will be sufficient CFUs of both “grease eaters” and “Nitrobacters” to degrade the organic materials.

One of the benefits of a highly aerated liquid in the EQ tank is the enhanced settling of the suspended solids (TS) in the clarifier in front of the RBC units. This enhanced settling occurs because of several reasons. First, as the organic materials are picked up by the pump and pumped into the venturi aerator they are accelerated. Then as go through the venturi aerator they exit the venturi’s internal nozzle where there is a rapid decrease in pressure (Dp = 14 psi) which cause the organic materials to break apart releasing imbedded gases which are oxidized, e.g. hydrogen sulfide, Imbedded gasses increase buoyancy inhibiting settling. As dissolved oxygen saturates the liquid the heavier particles settle to the bottom of the tank because of the change is specific gravity in the liquid itself. By releasing imbedded gasses and removing a significant portion of these organic solids the RBC can operate according to original design organic loadings. If not released these gases can accumulate and cause a low pH condition in the RBC. Sometimes covered RBCs need to have an exhaust fan installed to extract the buildup of carbon dioxide under the cover in the headspace of the covered tank. [Ref: Wayland-Sudbury WWTP 1992]   Carbon dioxide has a vapor density >1 and it can accumulate in the headspace under the cover. Frequently, this is overlooked when diagnosing RBC performance issues.

By adding dissolved oxygen in large quantities BOD reduction can occur in the preaeration EQ tanks. By reducing the organic loadings to original design parameters the RBCs work more efficiently. Having a residual DO means the microorganisms receive a wastestream that has been “conditioned” to optimize RBC performance.

By adding venturi aerators to the two-(2) in-ground EQ tanks prior to the RBCs, additional dissolved oxygen is added to “condition” the septage to enhance BOD reduction, TSS settling and nitrogen reduction prior to the RBCs. The RBCs work more efficiently and this facility is now consistently able to comply with its NPDES permit for nitrogen levels. Adding the Bactivator ensures a continuous supply of viable colony forming units of Nitrobacters and grease eaters to the RBCs in case there was sloughing for some reason off the stator plates on the RBCs. As a result of NPDES permit compliance the facility is looking to expand it daily permit to 750,000 litres of septage and will add additional venturi aerator units in the new EQ tank to handle this increase in capacity throughput. 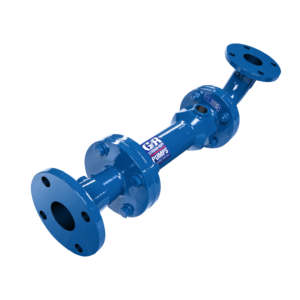 The Echo-Storm aerator features a classic design for modern applications. Whether you need a complete replacement or simply an enhancement to your existing system, the Venturi Aerator offers an innovative and convenient approach to your water aeration needs.

These aeration units are used in conjunction with Gorman-Rupp self-priming centrifugal pumps to deliver solutions with the following advantages: