By changing from unreliable surface aerators to Venturi Aerators for lagoon treatment, costs were reduced and the results were great!

There are numerous methods of water aeration. Splashing surface aerators, draft tube floating aerators, revolving brush aerators, and various forms submersible aerators. All require the machines to operate on the water surface or below the surface of the water they are aerating. This requires maintenance crews to access them by crane, row boat or tether systems.

The Gorman-Rupp EchoStorm water aerator on the other hand, is bank mounted. It uses a self-priming pump to draw water from the lagoon, then pumps it at pressure through the EchoStorm water aerator, and feeds it back into the lagoon, saturated with dissolved oxygen. Operators have easy access for maintenance, making these systems safer and easier to maintain, and because of this, greatly lengthen the time between major repairs and greatly increase service life.

Prior to the installation of the EchoStorm Lagoon Aerator units, Mr. Wood had been treating the two lagoons with ProBiotic products for the assimilation of a 20-year sludge build-up including grease. The lagoons had been aerated with two (2) 3.7kW surface aerators (one in each lagoon). While Mr. Wood had experienced some success in prior years in controlling hydrogen sulfide odours emitted from the anaerobic bacterial activity, over time a sludge blanket began to develop in the corners of the lagoon and along its banks. The sludge blanket became so well established that there were zones of sludge that were not being treated by the surface aerators and hydrogen sulfide odours returned. These areas were not influenced by the agitation of the surface aerators, and it grew to a point where there was a defined “radius of influence” that only extended 10 feet from the center of the surface aerator.

In the Spring of 1996, Mr. Wood reported that the sludge blanket in the primary lagoon was still substantial in depth and the corners of the lagoon exhibited significant concentrations of both settled and floating sludge. Due to frequent failures of the two surface aerators (over 10 years old), the owner was unable to maintain an aerobic zone on the lagoon surface, and residents filed numerous odor complaints with the local office of the New York State Department of Environmental Conservation (DEC). The NYDEC issued a Consent Order to the owner to take immediate action to abate the odours.

Within 1 day, the hydrogen sulfide odours were completely eliminated by the newly installed lagoon aerator!

These two Venturi Aerator units were installed with the pump located on the dike between the two lagoons. A suction intake line was manifolded into one suction intake line into the Gorman-Rupp pump, and the discharge was split between the two Venturi Aerator units, one in each lagoon. This configuration provided bottom to top turnover of the contents of the lagoon, pulled solids off the bottom for resuspension and digestion. Further, the kinetic energy of the Venturi Aerator was able to start spinning the “entire” sludge blanket with two hours of startup. The continued discharge from the Venturi Aerators began to break apart the spinning sludge blanket as it passed directly under the discharged liquids.

Previously when the old surface aerators failed the operator had to get into a rowboat and release the tether and pull the floating surface aerator to shore for repairs. With the EchoStorm lagoon aerators located on the bank of the lagoon, this eliminated the risk of the boat flipping over during cold winter months when there was ice on the surface of the lagoon.

Note: This case study was the basis for a presentation at a conference of ProBiotic Distributors and Sales Representatives held in Phoenix, Arizona delivered on January 17, 1997 by Mr. Gary Smith

Another AJ Bush Bromelton upgrade for better and safer aeration 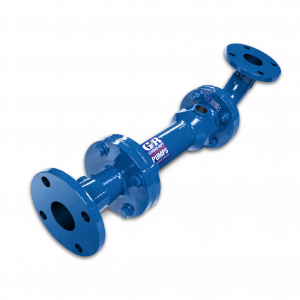 The EchoStorm water aerator from Gorman-Rupp offers the benefits of safety, reliability and ease of access to water aeration applications.

Because these units are mounted on the bank [instead of floating on the water or being submerged in it], access is much less complicated and safer, while delivering oxygen transfer outcomes.

These aeration units are used in conjunction with Gorman Rupp self-priming centrifugal pumps to deliver solutions for the following applications: 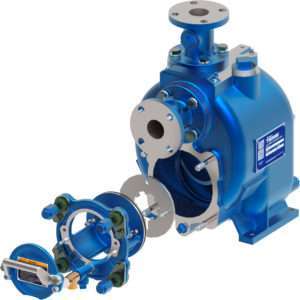 Another AJ Bush Bromelton upgrade for better and safer aeration